What Shell Am I Using?

I wanted to install the latest version of zsh on my MacBook Pro. This is usually the first thing I install when setting up a new machine. A brew install zsh and a chsh later and I'm good to go (well, technically I had to add the homebrew location of zsh to /etc/shells as well). Close out Terminal.app and reopen to make sure my changes took effect, and sure enough, there's my zsh prompt.

Yes, I know macOS Catalina ships with zsh as the default shell, but I want to make sure I have the latest... just because.

Curiosity strikes in and I wonder, even though the homebrew location of zsh is configured as my shell, am I actually using it?

Hold on. I want the full location.

Yup, that looks about right.

But wait... that only told me the location of zsh the executable which is only correct because I added homebrew's /usr/local/bin location to my PATH. That is literally the first line of the man page for which.

That means that if I were to execute zsh from my current shell a new instance of zsh from /usr/local/bin/zsh would begin. This doesn't tell me the location of the shell I'm currently typing in which started after opening Terminal.app.

Eh, I don't know. That tells me that it's configured as my shell but does not necessarily tell me the location of the shell I'm currently typing in.

Maybe I can find the currently running process of the instance of zsh I'm in right now.

Well that still doesn't give me the full path. And is that even the right process? How do I get the PID of the shell I'm currently typing in? Turns out there's a convenient shell variable $$.

Hmm, that's good I suppose, but I still don't know if the process with PID 78525, the one I'm currently typing in, is the correct zsh.

Oh yeah, I probably should have used lsof a long time ago but knowing how to get the PID of the current shell makes things a bit easier.

Ahhh, finally! Not a single of instance of /bin/zsh in the output. I think I'm pretty happy with this result.

Are There Other Ways?

But now I'm even more curious. Are there other ways to find this same information? Turns out apropos process returned a few results but of the bunch the only interesting find was fuser.

And no results for the pre-installed macOS version of /bin/zsh.

If you want a more point-and-click way of finding the same information then Activity Monitor has you covered. Make sure View > Applications in last 12 hours is selected. Expand Terminal.app and double click zsh. Clicking the Sample button on the bottom left gives you some detailed information about that running process. 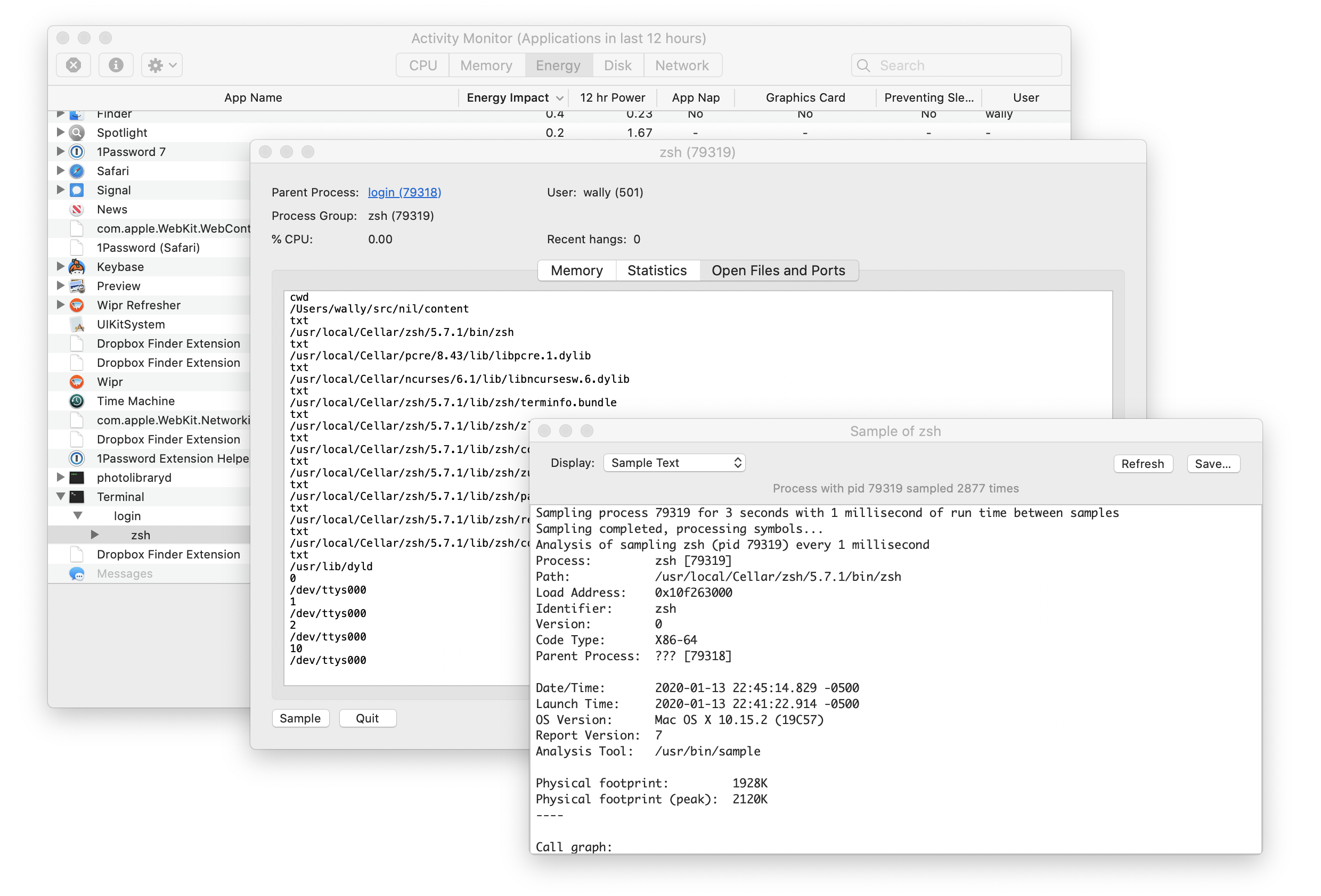 Fun fact: you can use the sample command for the same information.